Men’s Concept of a Slut

Basically, men want a woman who is loyal, faithful, monogamous, grateful, joyful, respectful, and able to keep her man happy. Perhaps the most important indicator for men in the process of choosing a woman, is that she has not been rejected by other men for failing to do so. Dalrock summed up a concise definition of a slut as follows.

“The sex specific nature of slut has not to do with the sinfulness of fornication (which is the same for men and women), but with the degree of practical risk involved with marrying such a person.”

Most men consider a woman to be a slut if she meets any of the following conditions, which are based largely on her age and sexual history.

The figure below shows the very particular preferences of men in deciding whether a woman is deemed worthy of a happy marriage, or otherwise condemned to slutville.

Women who have only one sex partner in their entire lifetime have the lowest risk of divorce, and are thus believed to be very happily married women. Women with two or more sex partners before marriage are known to be at higher risk for divorce. This is largely because of the woman’s apparent laxity towards commitment, and a lack of a properly sacrosanct attitude towards love, sex and marriage. Men need to know this intuitively. Indeed, the number of sex partners a woman has had in her life, has been shown to be directly correlated with her physical health, mental health, marital stability and overall happiness.

Another (possibly blue-pill) study found that women with exactly two premarital sex partners have the highest risk of divorce.

But the surprising thing, Wolfinger said, is that women with exactly two premarital sex partners have consistently higher divorce rates than women with 3 to 9 partners. “In short: if you’re going to have comparisons to your [future] husband, it’s best to have more than one…”

Does Wolfinger realize that it sounds like he’s encouraging young women to slut it up? Wolfinger seems to ignore the fact that from a man’s point of view, a woman with two lifetime partners is sitting on the fence, and she can’t decide which way to go. The path to the grassy green field of love, loyalty, and marital commitment, or the clusterf*ck mudwrestling competition of the SMP. Having sexual experiences with two partners is just enough to create cracks of doubt in the foundation of a woman’s innocent concept of true love. If she chooses to go mudrunning, she is choosing a very different lifestyle, and will find a very different kind of man as a husband.

But no matter which study you prefer to believe, the same conclusion still stands. A woman with two, or maybe three partners at most, is a “proto-slut”, meaning that she is standing at a cross-roads – her sexual purity has been compromised, her spiritual position is uncertain, and she could possibly go either way. (However, most women will probably find it easier and more enjoyable to slip down the mudslide.)

For practical and successful wifing, proto-sluts are questionable. If she doesn’t show a great deal of maturity, an authentic passion for the man, and a serious willingness to commit to him, then she is still on the fence. If protosluts fail to get their heads strait about which kind of life they want to pursue, and make clear life decisions accordingly, then by default, they are very likely to become a cougar with age, and later in life, the proverbial cat lady. Once a woman has had four partners, she is definitely learning to enjoy the freedom of choice that so many women get addicted to. Once the high sets in, the slide gets slicker, and the conscience gets quieter. After that, the characteristics of slut eye and the 1,000 cock stare are in their fetal development. Then, her status is only a matter of whether she can accept herself as broken meat and hope for the grace of God, or else, she tries to justify her sin with hamstertalk, and moxie herself to continue in it, at which point, she is a modern feminist who believes it’s her own private life, and her freedom of choice to do as she pleases.

However, in spite of these scientific results, which hedge what the Bible teaches about sexual promiscuity, sensational and liberal leaning media circuits repetitively publish yellow studies, like this one based on the outspoken opinions of members of lewd dating sites – opinions that flatly contradict scientific studies. These sites actively push the feminist narrative, by proposing that both men and women participating in serial monogamy, and who want partners with higher N counts, is the societal norm.

Women’s Concept of a Slut

To women, everything is relative, intuitive and emotional, including their judgment of sluts. This highly comprehensive paradigm of sluthood is condensed into the following figure, which shows how a woman’s slut rating of her own self (as a perceived standard of “normal”) plays a large factor in determining the sluttyness of another woman in question. (The Slut Hierarchy Checklist can be found in a previous post.) 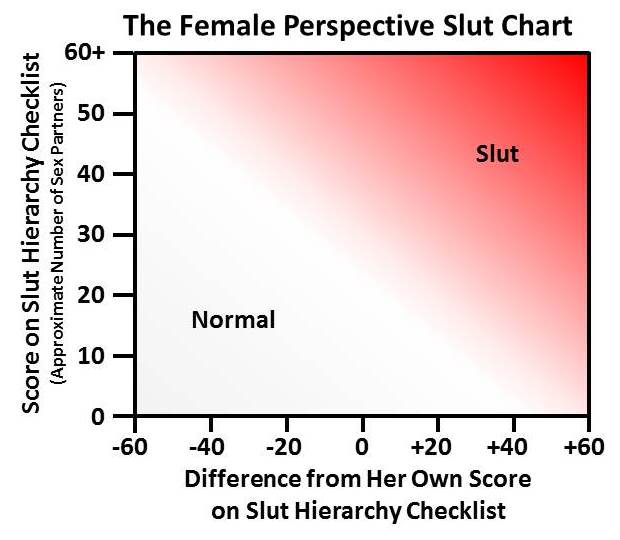 It is surprising for men to find here that a woman’s actual sexual history and partner count has very little to do with whether a woman would be considered a slut by another woman. Instead, for women, it is about image, the social identification of being in one’s peer group, and the imminent threat of competition in the SMP.

Jack is a world traveling artist, skilled in trading ideas and information, none of which are considered too holy, too nerdy, nor too profane to hijack and twist into useful fashion. Sigma Frame Mindsets and methods for building and maintaining a masculine Frame
View all posts by Jack →
This entry was posted in Satire and tagged Archetypes, Deconstruction, For Singles, Praxeology. Bookmark the permalink.