Women’s choice to be relevant

No matter what lifestyle they might prefer, women must choose to be relevant.  Includes a case Study of J.P. Sartre and S. de Beauvoir.

Hommunism just posted a concise and informative takedown of the evils of Feminism, Modern Feminism’s Enemy: Womanhood (2020 February 4)*.  It is quite a good read.  It included this quote from the founders of Feminism.

Did you get that?

“…authorized to stay at home…”

“…authorized to raise her [own] children…”

Wow!  You can almost feel the sinful solipsism from her psychological projection!

Of course, this goes directly against what we’re told in Titus 2:3-4.

“3 the older women likewise, that they be reverent in behavior, not slanderers, not given to much wine, teachers of good things— 4 that they admonish the young women to love their husbands, to love their children, 5 to be discreet, chaste, homemakers, good, obedient to their own husbands, that the word of God may not be blasphemed.”

I did a little search on de Beauvoir and found this photo of her. 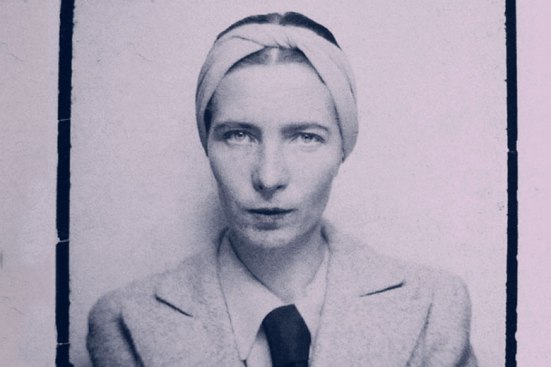 I’ve never seen such an icy cold look on a woman, and I can detect the vertical stab wounds of the 1,000 C0ck stare.

…and she’s wearing a man’s suit and tie.

Another woman of de Beauvoir’s generational cohort included the Wicked Witch of the West (starring Margaret Hamilton, 1939).  Compared to de Beauvoir, Hamilton is adorably cute, even in greenface. 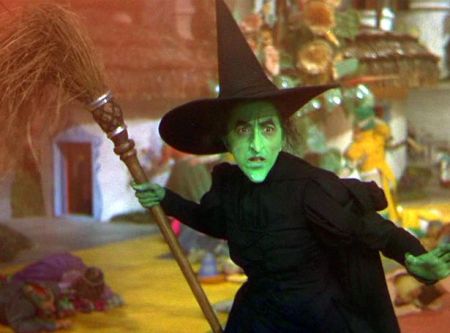 So far, de Beauvoir is not relevant at all.  Her motivations and conscious aspirations have little use or benefit outside her social circle.

However, it is interesting to know that de Beauvoir had a lifelong open relationship with Jean Paul Sartre, the leading existentialist philosopher of the 20th century.  Sartre was a great mind, but handsome he wasn’t. 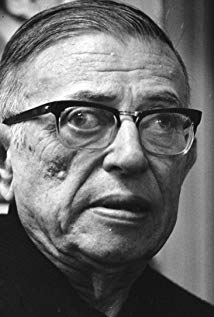 Young men, beware!  This is what cuckoldry does to your face!

Sartre wasn’t that unattractive as a young man.  He and de Beauvoir had had some kind of a relationship since their youth. 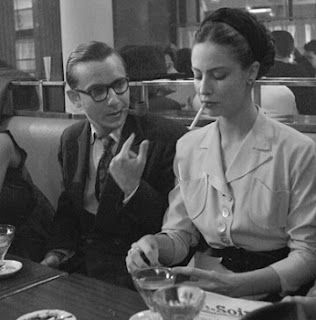 It appears that he was more into her, than the other way around.  She just can’t light up fast enough!

The truth be known, she was always on the prowl.

More than her contributions to society and philosophy, De Beauvoir was infamous for her sexual liaisons, including lesbianism, group sex, and debauching her students.

But apparently, she was really into this guy, Nelson Algren. 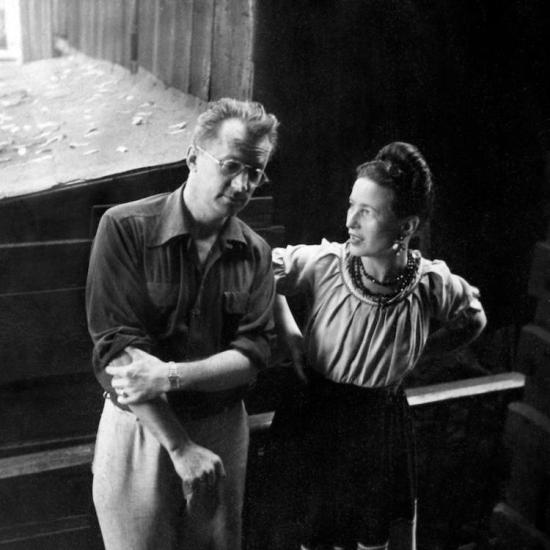 Even so, Sartre played the orbiter, even into their golden years. 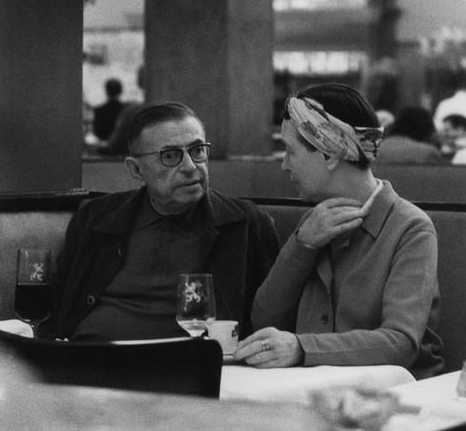 Unsurprisingly, no man would have her in marriage.  Besides, even though she longed for a husband and family, her work and her livid sexual promiscuities were more important to her than a commitment.

So how did she make herself relevant?

I suspect that de Beauvoire’s greatest contribution to humanity was not so much to Feminism, but rather in serving up regular doses of electrified ћә11 to Sartre (as well as her stultified, second-hand students), who then transferred that palm perspiration into his writings.

Verily, the existentialist view emerges from an agony and fear too intense to bear, combined with an imaginative mythos fueled by hope and desire.  Being in love with a reveling feminist, and experiencing the intense jealousy that results from her capricious indiscretions will suffice to this end.

She also had an impact on Algren’s success as one of the best known literary writers of his generation.  He produced his best work and spawned several films during his affair with de Beauvoir and within a few short years after.  Later, he won the national book award for his accomplishments.

It’s well known that psychotic women are sexual powerhouses.  She must’ve been super hot in the sack.  It’s also known that a saturated sexual satisfaction can yield an intensely clear mind.  Why else would these men tolerate her for years?

On to the next point.

Quality doesn’t matter as much as Relevancy

“Maybe Artificial Intelligence in the female form, will take over the role of caregiver in the family home.  Designed expressly by the man of the house, with all the desired attributes.

Babies will be produced in test tubes, with the eggs supplied by a few carefully selected human females who, once past their use by date, will then be desexed and sent to work in construction.  What a perfect world!  Everyone gets what they want.”

Of course, we know that she’s wrong about one important point.  She misses the fact that the highest quality females who are counted worthy of reproducing future generations of the human race will have already made the choice to marry and have children according to nature.  It is the lower quality females who make poor choices in life and who need to be cared for in their later years, either by the socialist state, or by marketing transcripts of their torrid affairs. 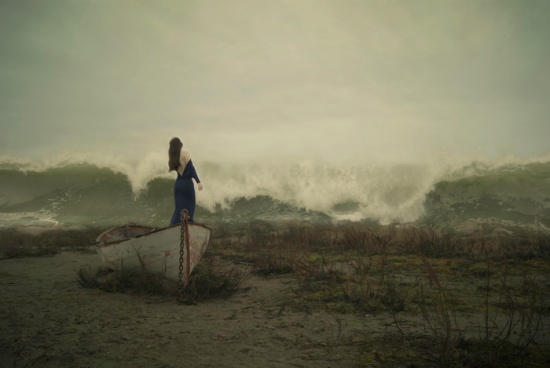 Low quality females quickly surpass their expiration date, and have little to offer society in their later years.  However, Wordlywoman2 says that such women can always work in construction during their later years, so they are not totally useless, nor relegated to a sunk cost status.

I’m not sure about heavy construction, but spinsters would be especially well suited for inspecting, quality control, painting, sewing, typing, cleaning, food service, decoration, repetitive assembly line work, and making general errands.  If I remember correctly, this is what spinsters did in de Beauvoir’s day.  They even made enough money to afford thoroughbred poodles and copious quantities of wine for their singles parties.

While I’m certain that Wordlywoman2 is trolling, she does make a good point.  Feminism doesn’t need to be all bad.  Those women whose lot in life is to be feminists, and those who might even prefer that lifestyle, can still do their own thing without bringing the rest of society down to their level.

Simone de Beauvoir was a low quality woman, but she made herself relevant.

Everyone gets what they want, whether they end up liking it or not.

But it’s their choice to be relevant.

Jack is a world traveling artist, skilled in trading ideas and information, none of which are considered too holy, too nerdy, nor too profane to hijack and twist into useful fashion. Sigma Frame Mindsets and methods for building and maintaining a masculine Frame
View all posts by Jack →
This entry was posted in Female Power, Feminism, Freedom, Personal Liberty, Influence, Models of Failure, Models of Success, Relationships, Solipsism and tagged de Beauvoir, Sartre. Bookmark the permalink.

4 Responses to Women’s choice to be relevant