The increase in the use of oral contraceptives correlates with abortion, divorce, and the number of unwed mothers.  A coincidence?

This post originally appeared on That Married Couple on 2013 February 5, and has since disappeared from the web.  However, this post deserves to live on.

When reading through this post, it should be noted that correlation does not necessarily imply causation.  However, these correlations are not spuriously random associations either.

I was so excited to give my first big NFP talk last week.  It was “big” in that it was open to our entire huge parish and 45 minutes long.  It was not so big in that 7 people attended, including my husband.  Luckily I had given over that whole “how many people will actually come?!” thing to God a long time before, so I could just enjoy the fact that there were no hostile audience members and give it a much more casual and intimate feel.  And it went well!

When I was preparing for this talk, I was quite frustrated in not being able to find good numbers.  You know how you hear people talk about how all these social problems increased hand in hand with contraception use? We all realize logically that this is correct, but I had a heck of a time finding the data to make pretty graphs documenting it.  So I decided I should post what I did finally hunt down, in case anyone else out there wants to access these numbers.

This post is chock full of caveats, however, so please don’t just copy and paste the charts without reading the text and understanding them! And if you know of any better data, please please share it!

This is the data I had the hardest time finding.  All the other numbers I could get fairly easily from the CDC, but this is basically all they had for contraception.  For the years 1982, 1995, 2002, and 2006-8, they have numbers of women who have ever used any method (see document page 18/pdf page 26), which increases from 94.8% to 99.1% during that time period.  (Please note they do include “periodic abstinence” in these numbers.)  They also have the number of women who currently use those methods for the same years (document page 21/pdf page 29), which goes from 55.7% of all women to 61.8%.

This was unsatisfactory for a couple reasons, but most of all because it didn’t have anything from the 60’s and 70’s, which would show the dramatic initial growth in number of women using contraception.

I finally found some numbers for how many women were on the oral contraceptive pill during those years, via the website for the PBS documentary “The Pill.” I don’t know where they obtained these numbers, which makes them a bit questionable, but they were the best I could find.  With that, I was able to create this chart showing the use of oral contraception in the United States from 1958 to 2008.

It’s not perfect, as I would have preferred percentages as opposed to raw numbers and a few more data points.  It certainly doesn’t show the full extent of contraceptive use in our country, as an estimated 34 million women use some form and this only highlights approximately 11 million.  But the chart is effective in getting across the general trend of contraception in our country – a dramatic increase and then a sort of leveling off once basically every woman who wants contraception has access to it.

I then took this chart of oral contraception (OC) use and overlaid it with charts showing the divorce rate, unwed mother rate, and abortion rate.  I did not do any math or anything for this, so statistically speaking you wouldn’t want to say these are correlated until you did so.  (And if someone would like to just punch this all into SPSS or something and do it for me, I’d be very appreciative.  I can send you the raw numbers in excel.)  But nonetheless, it’s pretty clear that there is some sort of relationship between these factors.

However I don’t think that particular chart speaks to people as powerfully as it could.  So I took the annual divorce rate and divided it by the annual marriage rate to come up with the chart below.  Again with the caveats – this is not an ideal way to get this number, and it doesn’t indicate the likelihood of a given marriage ending in divorce.  But I believe this is how people come up with the quote that half of all marriages end in divorce, as this rate has been hovering around 50% now since the mid-1970’s.

Now check it out overlaid with OC use. 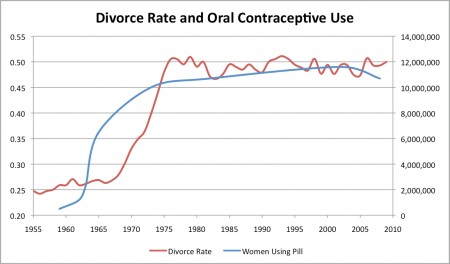 Now you obviously don’t want to make light of the pain of divorce or the many complex reasons behind an individual couple’s situation.  No one is going to say “Oh yes, we got a divorce because we were using contraception.” However, when we look at the big picture the two factors are certainly related.  In particular, economist and demographer Robert Michaels looked specifically at that big jump you can see above, where the divorce rate doubled in 10 years – from 25% in 1965 to 50% in 1975.  He concluded that 45% of that increase is due to increased use of contraception [1].

Not only are there more single parent homes due to divorce, but there has been a crazy increase in the number of children born to unwed women.  (Here’s CDC data from 1940-1999, 2000-2009, and 2010.)  Currently 41% of all children born in the United States are born to an unwed mother.  Isn’t that shocking? And for African American children the situation is even worse – 73% of them are born to unwed mothers. 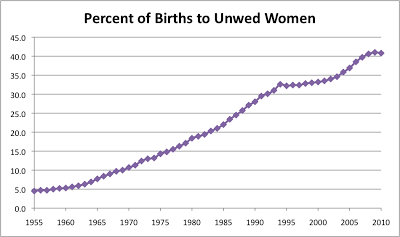 While it doesn’t have the exact same line as contraception use, we can certainly see that an increase in contraception has not helped with these situations.

Two notes on this chart.  First, you can see that shortly before and then certainly after abortion was legalized in 1973, we have a dramatic increase.  The rate doubled in less than 10 years.  Second, you may be encouraged to see the decrease since the late 1990s, but it is very important to note that this is because the data is incomplete.  Around 1998, the CDC went from having 52 states reporting down to 47.  The actual decline for those 47 areas was only 2%.  In particular, California stopped reporting.  In the last year that estimates were made for California, 23% of all abortions happened there.  So you can see how by simply not including them, it looks like we have quite a drop.  If I had to guess, we probably have another plateau, from roughly the 80s to now.  You know, essentially following contraception use again.

For more on exactly why/how an increase in contraception actually is followed by an increase in abortion (as opposed to a decrease, as many people expect), let me just direct you to 1 Flesh, because they have better graphics and plenty of references.  I’ll just repeat what the Supreme Court had to say about it (Planned Parenthood v. Casey, 1992):

“In some critical respects, the abortion decision is of the same character as the decision to use contraception…  For two decades of economic and social developments, [people] have organized intimate relationships and made choices that define their views of themselves and their places in society, in reliance on the availability of abortion in the event that contraception should fail.”

So there you have it.  Numbers and simple charts illustrating them.  Hopefully they’re of some help to someone else out there!

Jack is a world traveling artist, skilled in trading ideas and information, none of which are considered too holy, too nerdy, nor too profane to hijack and twist into useful fashion. Sigma Frame Mindsets and methods for building and maintaining a masculine Frame
View all posts by Jack →
This entry was posted in Contraceptives, Models of Failure, Relationships and tagged Analysis. Bookmark the permalink.