Harbingers of the Impending Collapse of the U.S. Social Security System

The United States population is growing at an exponential rate, due to the following factors.

The age and demographic structure of this growing population will determine, for the most part, the future feasibility of the social security system. 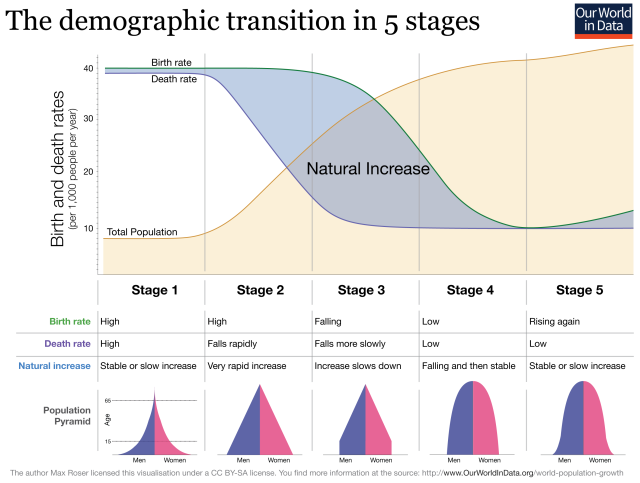 The following Population Pyramid for the United States from 1980-2050 clearly shows a columnar structure, indicating an aging population. In an aging population, there are a large number of adults, including seniors, and very few children. Growth is stagnated.

If you watch the animation, you can see that the width of the column steadily increases over time, which suggests that there will always be a larger population of younger citizens who are paying the pensions of an ever growing number of elderly retirees. However, by 2050, the column becomes so top-heavy that it begins to resemble a mushroom, indicating “negative growth”. So it is unclear whether this difference will cover the debt already incurred, in addition to the skyrocketing pension costs of the ever expanding retirement age in the future. It is improbable that higher taxes, and an influx of working-age immigrants (~18%) could cover this difference.

Goss [1] argues that the primary cause of Social Security’s increasing expenses is due to the decreasing birth rate, which results in the age imbalance shown in the current and future year population pyramids.

“Adjusting birth rates to include only those children who survive to age 10 results in fairly flat total fertility rates near three children per woman from 1875 through 1925. From 1926 through 1965, this adjusted total fertility rate was still about 2.7 births per woman, on average, including both the temporary low-birth period of the Great Depression and World War II, and the temporary high-birth period after World War II. After 1965, however, the total fertility rate shifted to a new level around two children per woman. It is this apparently permanent shift to lower birth rates in the United States that is the principal cause of our changing age distribution between 2010 and 2030 and the resulting shift in the ratio of beneficiaries to workers.”

“Chart 11 demonstrates even more vividly the impact of the changes in birth rates on the age distribution of the population. The aged dependency ratio (ratio of population aged 65 or older to the population at working ages, 20–64) has been almost flat since 1975 and was held down between 1994 and 2010 as the relatively low-birth-rate generations born during the Great Depression and World War II (1929–1945) reached age 65. However, this ratio will rise substantially between 2010 and 2030, reflecting both the attainment of age 65 by the baby boom generation (born 1946 to 1965) and entry into the working ages of low-birth-rate generations (born after 1965) that followed the baby boom. The dashed line in the chart illustrates what the projected dependency ratios would be if we assumed no further improvement in life expectancy after 2008. The chart demonstrates that through 2030, the upward shift in the ratio is almost entirely because of the changing birth rate. The illustration for the total dependency ratio (ratio of the population aged 65 or older or younger than age 20 to the population at working ages, 20–64) tells essentially the same story.”

“Chart 11 also shows that improving life expectancy after 2008 does begin to produce significant effects on the age distribution of the population after 2030. But the permanent shift in the age distribution between 2010 and 2030 because of lower birth rates remains the dominant factor for the increased Social Security program cost over the next 75 years.”

In the previous section, Goss [1] argued that the primary cause of Social Security’s economic crunch is due to the decreasing birth rate, and not due to the increasing average life span. Disregarding the effects of the increase in life span seemed questionable to me, so I did a little more research about the history of the social security system.

When President Franklin D. Roosevelt installed the Social Security program in 1936, it stipulated a retirement age of 65, which meant that people would have to work a regular job until that age, before they were eligible to retire with benefits.

The average life expectancy in 1936 for a working class male in America was 58! Which implies that the majority of men had to work until their dying day! These men expected to pay into the system for their whole lives, never knowing if they would ever live long enough to see a social security check.

Doing a little more math, in order to live long enough to be eligible for retirement under the social security program in 1936, a person would have to outlive the average life expectancy by 12%. So it’s obvious that Roosevelt cut pension costs to affordable levels by only making payouts to < 40% of those who paid into the system, and who also outlived the age of retirement eligibility.

If we applied this same arithmetic to the current life expectancy of ~78, then to install the same “tax until death” retirement system, we would have to set the retirement age at 88! But try to suggest this idea to any person of the Boomer generation, especially those set to retire in the next few years, and you’ll see the temper tantrum of the century. (I did this once, and I found it was surprisingly entertaining to see a Boomer so bent out of their typical “peace and love” character.) So naturally, no politician wishing to extend his career is going to pass a bill basing the retirement age on the average lifespan. (I suspect that Goss could be a Boomer who is doing backflips to avoid this conclusion.)

[Eds. note: Could POTUS Franklin D. Roosevelt actually have intended to get the country hooked on socialism?]

Immigration could possibly tilt the system very hard, because immigrants don’t pay into the system before arriving in the U.S. A pessimistic outcome is therefore predicted, even when given the most generous estimate, which assumes that most immigrants are legally employed, and don’t collect state benefits, such as unemployment insurance.

For example, if an immigrant came to the U.S. at the age of 40, then he’s only going to be contributing to the fund for 25 years, whereas, a person who grew up in the U.S. would be paying into the fund for about 40+ years. However, the same individuals will be relying on Social Security payouts and health insurance benefits after retirement, for as long as they might live. This effect could be offset, if the retirement award is prorated based on how many years they worked in the U.S., or how much money they paid into the system.

On the other hand, immigrants tend to have more children than the native population, on the average. This would cause the bottom of the population pyramid to widen, which would provide a larger working class, and more taxable income to prop up pensions in the following 20 years. 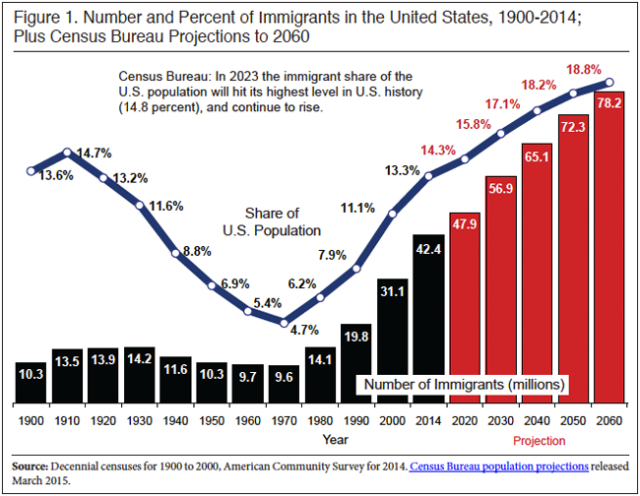 The graphic results of the Hart-Celler Immigration Act of 1965.

There are two real solutions to the impending financial crisis.

It appears obvious that the Deep State is pushing the U.S. towards the first outcome. The Globalist powers in Europe have already advanced this agenda past recovery in France, Sweden, and probably Britain too.

If you are in favor of such a system, then there are practically no actions that need to be taken. Simply avoid getting married, don’t have children, and continue to vote Democratic.

But the message to conservatives in the U.S. who wish to avoid a socialist state determined future is pretty grim. There are a number of actionable steps that are needed, and none of them are easy.

Politicians will talk out of their @$$ǝ$, saying whatever will pander to the peace and get them reelected. American citizens need to tell politicians what they want in no uncertain terms.

What should the government be doing?

It would be difficult to crunch the numbers any further, to wring out exactly how much debt the present Social Security system would incur, if continued into the coming decades, but it looks pretty grim.

If nothing is done to correct this trajectory, then when Millennials and Zyklons retire, they may be facing ϟocialism ϟecurity (ϟϟ death camps).

But perhaps this is exactly what our Deep State Boomer politicians have intended!

Jack is a world traveling artist, skilled in trading ideas and information, none of which are considered too holy, too nerdy, nor too profane to hijack and twist into useful fashion. Sigma Frame Mindsets and methods for building and maintaining a masculine Frame
View all posts by Jack →
This entry was posted in Building Wealth, Collective Strength, Culture Wars, Models of Failure, Society and tagged Analysis. Bookmark the permalink.

3 Responses to Harbingers of the Impending Collapse of the U.S. Social Security System