The Pygmalion Project vs. Shared Enterprises

This article discusses the Rosenthal/Pygmalion/Golem Effects – the general habit of LTR partners to pick out the weaknesses and annoyances in the other, and demand that these aspects be changed, which only leads to an exacerbation of the perceived problems. Sharing an enterprise is illustrated as one way to upset and displace the Pygmalion interaction dynamic.

Targeted Readership: Those who are in LTR’s

The material is arranged in the following sections.

1. The Frustration of the Feelz

In today’s culture, most people in a relationship rate the quality of their relationship by how they FEEL about the complementary partner in the relationship.

From the Feelz Perspective, the woman usually has the ‘advantage’, simply because women are more emotionally and relationally ‘in-tune’. We often see women assuming a role of leadership based on her intuitions about things, which are mistakenly taken to be an infallible authority. In fact, this is a weakness that most all women have. Their basic needs for security and resources drive them to seek control.

However, the man is at a severe disadvantage if he accepts the woman’s leadership, because by submitting to her, he proves himself unworthy of her respect and admirations. He also sets the relationship in motion towards disaster.

Men who take the feelz approach might fall into several categories.

All these types of men prove themselves to be low SMV men, which women invariably grow tired of, after they exhaust the affirmation and resources that these men have to offer.

Yet, women tend to stick with such men (at least for a time), especially those women in their peak libido phase (mid 30’s) who have hit the wall. These women don’t seem to realize that it is not their choice of a man that is the source of their discontentment, but rather their own inability to achieve contentment in general. This discontentment formed in conjunction with their indulgences in non-sustainable, but thoroughly exhilarating sexual relations with fly-by-night jerkboys, and thereby losing their window of opportunity (in their early to mid 20’s).

Next, we examine one of the primary control strategies that women attempt to use in order to satisfy their own feelz of discontentment.

[Eds. note: The Pygmalion Project (discussed later) is not an entirely unique phenomenon to the Frustration of the Feelz, but perhaps it is one of the most relevant to many men’s experiences with women.] 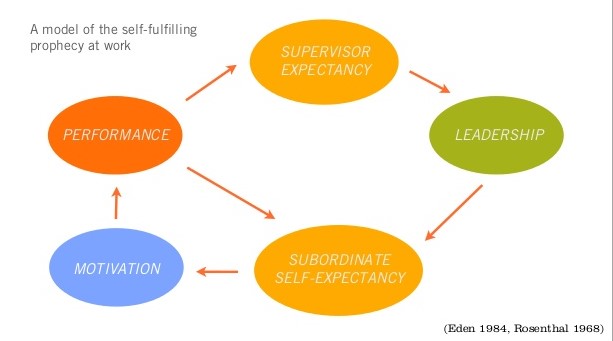 The Rosenthal Effect, which is popularly known as the ‘Self-Fulfilling Prophecy‘, has been shown to be widely effective in educational classrooms and business personnel management policies.

Rosenthal and Babad wrote in 1985,

“When we expect certain behaviors of others, we are likely to act in ways that make the expected behavior more likely to occur.”

However, many people, and especially women, have the misguided notion that the Rosenthal Effect also applies towards female to male relationships. It does not!

In the case where one partner presumes that the Rosenthal Effect will be helpful in improving their relationship, and makes efforts along these lines, then a different dynamic comes into play, which is called the Pygmalion Effect. The dynamics of the Pygmalion Effect are shown in the figure below. 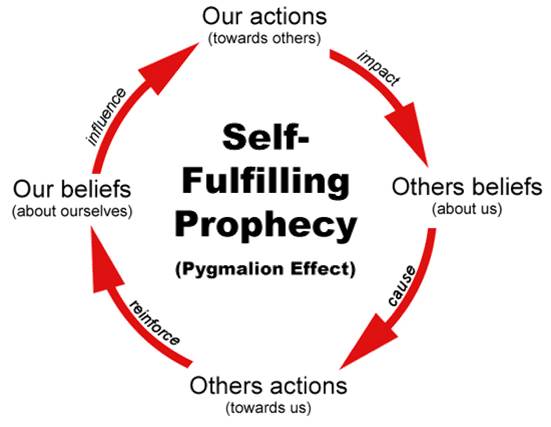 The practice in which one, or both partners apply pressure on the other partner, in attempt to get them to CHANGE a behavior deemed undesirable, is called a Pygmalion Project, and this is one of the most common approaches towards ‘improving’ a relationship. Unfortunately, it is a misguided and vain devotion.

Why doesn’t the Rosenthal Effect function in a similar manner within male-female relationships? There are several reasons.

Towards an actual improvement of the relationship, people want and need to be accepted for who they are, farts, warts, quirks and all. Acceptance must always be offered as a gesture of genuine love, and it is only this love and acceptance that can hope to bring the changes that one desires in their partner.

But those who are spiritually immature don’t understand how to let God work on their partner. So they often resort to the Pygmalion mindset, by raising their expectations, or by giving their partner the Wake Up Call.

Men typically don’t have a positive response to the Golem Effect, because they have a sub-zero tolerance for drama. They either (1) tune out and tolerate her from a distance, (2) fold and submit to her will, or (3) they walk out the door.

[SF Axiom 4: It’s very important to be generous concerning one’s expectations of others. Otherwise, the Golem Effect kicks in.]

[SF Axiom 5: People, especially men, will not ‘change’ themselves simply because their partner demands and pressures them to do so. In fact, they tend to become more resistant to making that particular change.]

3. Enthusiasm Towards Shared Enterprises Supersedes the Feelz and Frustrations

Many couples initially meet by participating in common activities, and this is the atmosphere that brings out people’s true nature and personality, which is naturally attractive. But it is often the case that after a relationship has been established for some time, couples neglect to continue these shared endeavors.

If a couple can identify enterprises in which they both share certain goals, and negotiate an agreement about how to proceed towards those goals, then their interaction changes from a zero sum, to a positive sum game. Turning their eyes away from the ‘problems’ they see in the other, and looking at how to cooperate to meet those goals, can be a life granting transformative change in the relationship.

Under these circumstances, the inherent differences in each person’s respective personality become supplementary strengths which counter the weaknesses in the other. In this regard, the appreciation of one person’s strengths replaces the Pygmalion/Golem habit of shaming the other person’s corresponding weakness.

Instead of focusing on their selfish selves, their frustrating relationship, and their state of emotional turmoil, they should turn their attentions outward, to see the world together.

A few shared activities which languishing couples may consider include the following.

At its root, this approach takes the focus off of the ‘other’, and turns the focus towards the outside world. Also, the shared enterprise builds ‘Closeness’ and emphasizes ‘Togetherness’, which, as Eggerichs pointed out, score big points with women.

[SF Axiom 6: Motivation to change can often come when a person sees how a change can bring them more of what they want in life.]

To offer an example, early in our marriage, my wife had an emotional need to keep the house clean, but she has the brand of ‘laziness’ that is common to humanity, which rendered her unwilling to actually do all the difficult and time consuming work of cleaning that was necessary. As a man, I didn’t really require an immaculate house to be happy, so she often said I was too dirty or messy, and that I made her job more difficult.

I could have insisted on continuing my old habits and tried to get her to stop nagging me, but this would have become the Pygmalion Project in action, as discussed above. That is, she would be nagging me to be more tidy, I would be nagging her to stop nagging, with each of us becoming more set in our ways with a growing ego investment causing us to be more resistant to change. Hence, the Golem Effect sets in.

So instead, I chose to stop letting her shame me for leaving socks on the floor, etc., and started to appreciate her desire for cleanliness as a positive trait which I didn’t have.

To demonstrate that I had accepted the habit of cleaning house as a shared enterprise, I spearheaded an organized household cleaning effort once a week, for at least two hours. By doing so, I was able to play the ‘Supervisor’ role by exercising authority over what was to be cleaned, and how much time was spent in doing so. I was also able to get her help to clean things that she would never notice, like underneath the sink, or never clean on her own initiative, such as the oven.

If she ever complained about any accumulation of dirt, then I would just tell her we would clean it on Saturday, and that she should make a list of everything she wanted done.

This worked for us, because she wanted to have a cleaner house, but I did not want to be cleaning every day, and I didn’t want to be nagged about it either.

We also got the bonus of having a lot of contentment and happy moments in working together in this way.

Also, I was not discontented by having a cleaner environment to enjoy.

Best of all, after a few months of this, she found a sense of internal happiness in cleaning house by herself, and she didn’t nag me anywhere near as much as before.

I think it is also important to point out that she (the woman) needed me (the man) to lead the enterprise. This gave her a much needed sense of security, place, and purpose.

The only annoying thing is that she still sometimes talks like she’s the boss of the house, or that I am her helper (i.e. imagining herself to be playing the role of ‘Supervisor’).

Yeah, whatever… I know I’ve already taken control of this situation, so I will allow her this small ego indulgence. After I get her attitude running smoothly, it will be less hassle for me.

Some particular challenges that may arise when a man encourages his woman (or vice versa) to participate in a shared enterprise, are listed as follows.

In Cases 2 and 3, it may be helpful to begin with an enterprise which motivates her internally, like renovating a living space, or helping her wash dishes, or cleaning house together (as described earlier). After she gets a taste of the joys and successes of cooperation, then you can suggest more objective types of goals, such as following a budget or hosting a party.

Couples should stop creating high standards to pressure false convictions which would prevent the other person from experiencing an internally motivated conviction and the saving grace of God. In other words, couples should stop trying to leverage the other person’s avenues of conviction towards what is important only to one partner or the other, so that the Holy Spirit and conscience can invoke the spiritual conviction of what is truly important for that person’s spiritual health in the eyes of God.

The reason that the sharing enterprises approach works, is because it takes one’s eyes off of the difficulties and frustrations in their relationship, and puts the focus on a mutual goal. In doing so, both of their energies are applied towards constructive endeavors, and they naturally refrain from creating the drama which fuels stress and lowers the boom.

Jack is a world traveling artist, skilled in trading ideas and information, none of which are considered too holy, too nerdy, nor too profane to hijack and twist into useful fashion. Sigma Frame Mindsets and methods for building and maintaining a masculine Frame
View all posts by Jack →
This entry was posted in Collective Strength, Conflict Management, Leadership, Male Power, Models of Success, Organization and Structure, Psychology, Purpose, Relationships, Strategy and tagged Analysis, For the Married, Ontology. Bookmark the permalink.

20 Responses to The Pygmalion Project vs. Shared Enterprises